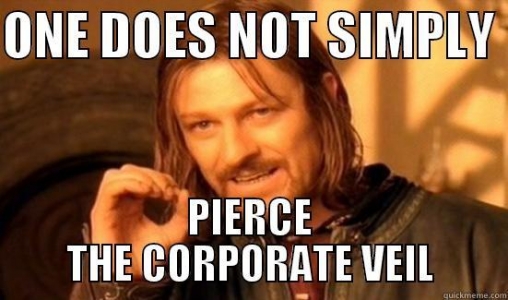 Those of you who have worked on alter ego cases are aware of the strong burden of proof establishing alter ego and piercing the corporate veil. If successful however, it can open doors of available assets and income that a person is trying to shield from creditors, or their spouse.

I was involved with a recent decision in Arizona where the court permitted the corporate veil to be pierced and allowed the assets to be entered into the community estate for division between the parties.

This case involved a person who set up a company, back in 1999, to shield and protect his assets from creditors. He funneled his personal income and assets through the entity for over 15 years. He extended the entity’s protective purpose to try to exclude the income and assets he placed in the company from being included in the marital estate.

In his ruling, the primary case the judge relied on was Deutsche Credit Corp. v. Case Power & Equipment Co., 179 Ariz.155, 827 P.2d 1190 (App. 1994) which states a corporation may be the alter ego of an individual when “there is such a unity of interest and ownership that the separate personalities of the corporation and owners cease to exist.” Deutsche listed 12 factors material to the alter ego analysis (e.g. common officers or directors, failure to maintain formalities of separate corporate existence, owner’s making of interest free loans to corporation, commingling of personal and corporate funds, intermixing of shareholders’ actions with those of corporation, etc.). The ruling indicated “these factors are not exclusive and obviously broad enough to address a variety of factual scenarios.”

As opposed to a weighing of which of the twelve factors did or did not apply, and despite a number of factors not being present, the ruling focused on “a few critical factors” (Husband’s control of the entity, the commingling of personal and corporate funds, and the diversion of corporate property for the communities use) in his ruling that the entity was the alter ego of Husband.

Husband argued the entity was owned and capitalized by his long-time close friend and that it existed to protect his friend’s assets; not Husband’s. Husband testified he “was never an owner, officer or director” of the entity.

The ruling overlooked this testimony and stated “Husband was the central force in forming, managing and operating” the entity, “Husband solicited friends to purchase stock” (even though only one shareholder actually paid anything for shares), “the officers of corporation had no role in operating it, Husband controlled the day to day business, made investment decisions, prepared the tax returns, and moved assets between the entity and other entities with little or no involvement or oversight.” He also ruled a “significant percentage of the funds flowing into the entity…related to personal services performed by Husband” and that “Husband controlled the entity for the benefit of himself and others.” The Judge also indicated the payment of over $1 million of personal expenses, without any salary, and the purchase by the entity of three different residences used primarily by the community was considered as factors in his decision.

The Court acknowledged that this arrangement does not neatly fit within the factors set forth in Deutsche Bank. However the Court ruled “the entity and Husband had such a unity of interest that the entity functioned as the alter ego of Husband, and thus the community. Accordingly, Wife is entitled to half of the value of the entity.”

A few important things to pull from this ruling are as follows: The Court did not view the factors expressed in Deutsche Bank as a strict checklist where all or a majority of the factors had to be met. Instead, even though a number of the factors did not apply to this case, several of the factors were “critical” that led to the determination of alter ego status.

This was a complex case. The Court stated “this dissolution action involves a tangled web of finances that is virtually impossible to unwind”. Identifying and valuing Husband and Wife’s community assets is now a twisted maze as well.” It went onto state “It would take hundreds of hours and hundreds of pages for the Court to address every transaction impacting the community, or to even identify and describe the transactions related to the entities which were subsequently formed to move money, property, or both. The Court has therefore treated the issues in somewhat a summary fashion”.

This was one of a number of disappointing elements of the ruling. The entity went from a value of $18 million in 2009 to what the Court determined to be no value. Specific transactional evidence was provided to show how Husband depleted the value of the entity, and thus the community, by millions of dollars when the divorce was eminent including single-handed transfers of assets away from the entity to other entities he controlled, including pension plans he administered (triggering self dealing and prohibited transaction concerns). Yet the Court did not hold him accountable.

In the author’s opinion, Husband depleted the value of the entity by funneling his personal services away from the entity, (which did not allow the entity to pay its ongoing obligations) and single handedly continued to transfer assets out of the entity without proper consideration. These waste issues were not properly addressed in the Court’s “summary fashion” decision.

Despite this unusual oversight, the main point of this article is that the decision allowed alter ego status based on just several “critical” Deutsche Bank factors, even though a number of the factors did not apply to the case.